Marriage of the Di Daughter CH 13

Just typing the title of the novel in google is enough to find us.

Please don’t support aggregator sites which steal our novels and repost without permission. 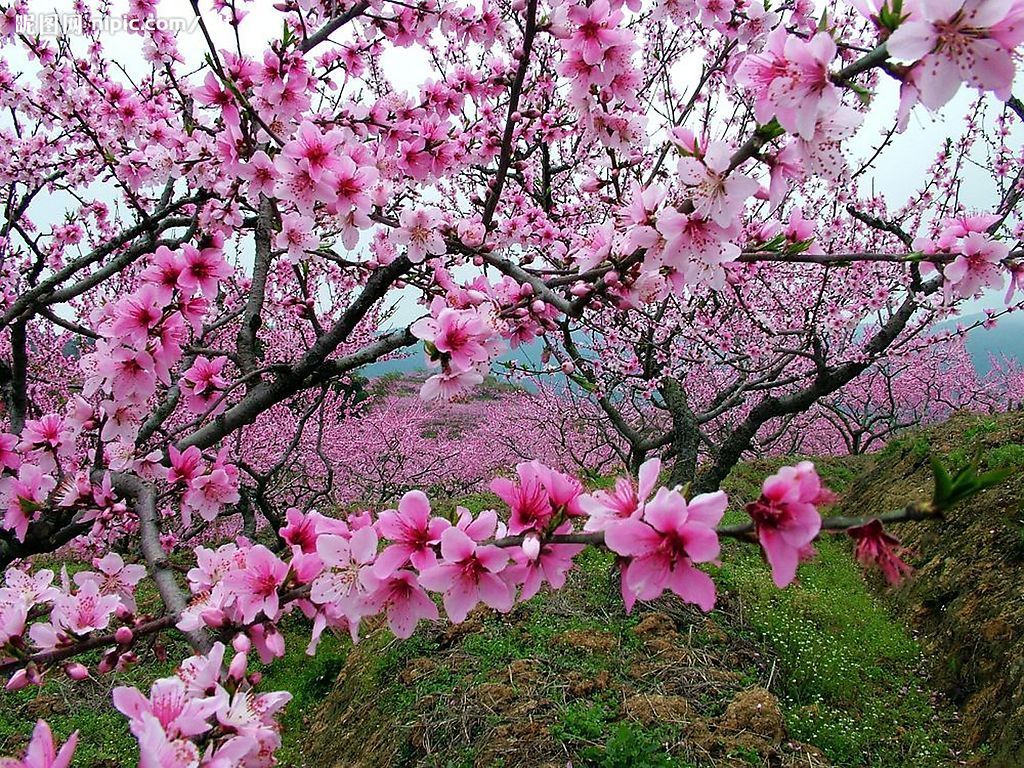 The peach blossoms on top of Mount Qingcheng bloomed in abundance; it was extremely flourishing.

Right after they bloomed, the majority also started to wilt.

Even though they had wilted, they still retained their pinkish white color.

The sight was really befitting of the rumor of He Lin Temple’s amorous monk, adding quite a bit of charming and gentle ambiance to the mountain.

The weather up in the mountaintop was not as hot as at the bottom of the mountain, where it was extremely fresh and cool.

Unlike in the past, Jiang Li and Tong’er no longer needed to do endless work.

Before leaving, Madam Liu had thoughtfully left enough food and silver for them.

There also was Yu Xiang assisting at the side, and the nunnery was devoid of those hateful nuns.

Tong’er’s laughter could be heard much more often than before.

On the second day of the sixth month, there was a sudden noise outside the nunnery.

At this time, Tong’er was sitting in front of the window listening to Yu Xiang talking about interesting things that happened in the capital city of Yanjing during these past few years.

She was startled upon hearing people’s voices and said strangely: “What’s happening outside”

Jiang Li, who was sitting together with Tong’er and listening to Yu Xiang, moved her eyes and quietly said: “They arrived.”

“Who has arrived” Tong’er was puzzled.

Jiang Li smiled slightly: “The people who are picking us up have arrived.”

Yu Xiang thought for a bit, then she got up and said: “This servant will go outside to take a look.

“There’s no need.” Jiang Li smiled as she also got up: “I will also follow.

Let’s just go together.” Without waiting for Yun Xiang’s reply, she took the lead to walk outside.

Upon seeing this, Tong’er hastily got up to follow her outside: “This servant will also go!”

Ever since the matter between Master Wu and Head Nin Jing An was revealed, both He Lin Temple as well as the nunnery were abandoned.

Originally, although the incense burning here was not that vigorous, before its reputation suffered this devastating blow, those honorable people still took the initiative to come.

Now, they were eager to put some distance between them and this place, afraid of being misunderstood as having relations and be pointed at by others.

As a result, it had been very quiet in the past half a month.

With the abrupt arrival of people, it appeared particularly obvious.

As they stepped out from the big door of the nunnery, they were right away faced a group of people who had been standing in a row.

There were approximately 20 people standing, with the majority of the people wearing bodyguard uniforms.

There were also a few dressed as servant girls headed by a black-clothed madam.

The clothes had a small vest made out of satin.

On her hair, a solid gold hairpin of a dazzling flower the size of a person’s eye was inserted.

As the person in the head, her stature was tall and lofty, her sight carried a bit of fierce arrogance.

These people standing here looked out of place.

When the three people came out from the doorway, the madam heading the group sized them up.

She took a step forward and said: “This servant greets second miss.”

She wasn’t the genuine Jiang family’s second miss to receive this gesture.

She also didn’t know what this madam’s name was.

However, she also didn’t feel the need to be afraid.

The madam not only didn’t receive Jiang Li’s reply, but from the looks of it, she had calmly received her greetings.  She couldn’t help feeling somewhat astonished.

Unable to hold herself, she raised her head to look at Jiang Li.

In reality, six years had passed, and there were not many people in the whole Jiang family who still remembered Jiang second miss.

Even the people who had met Jiang Li, afraid nowadays they could only vaguely remember the young lady’s appearance.

This time, lifting her head up to see, the madam felt that the young lady before her was very unfamiliar.

When Jiang Li was sent to the nunnery, she was merely a young and tender child.

However, at this moment, the girl before her eyes was wearing simple and neat clothing, with a clear look, and stood there elegantly.

With her clear and pure appearance, she deserved to be called Chief Assistant Jiang’s di daughter, there truly was no difference with her father.

In the madam’s mind, this sentence suddenly emerged for no reason.

Tong’er blinked her eyes and feeling strange, and she asked: “Sun momo, why did you come”

As it turned out, this madam’s surname was Sun.

Jiang Li was thinking this when she heard Sun momo smilingly replied: “Madam ordered this servant to welcome second miss in returning home.

Second miss has stayed here for a few years.

Madam has been endlessly concerned and has repeatedly mentioned to the lord to bring second miss back home.

A few days ago, lord finally agreed, and madam immediately sent this servant to bring a few people and pick second miss up.”

Don’t forget to read this at our original translation site, Blooming Translation blog!

Saying that Madam Ji Shuran wanted to pick up Jiang Li, but on the contrary Chief Assistant Jiang Yuanbai had obstructed it by every means, it sounded as if she, this daughter, had indeed not obtained her father’s love.

In the end, whether this was a fact or instigation, Jiang Li naturally was able to see.

She smiled and nodded towards Sun momo before saying: “Many thanks for mother’s concerns.

At the nunnery, Jiang Li also keeps thinking of mother, not being able to wait by mother’s side and be filial, it was my fault and regret.

In this life, I certainly will think of ways to repay her.”

Her voice as she was speaking was soft and meek.

Yet, as Sun momo listened to her, she didn’t know why she felt goosebumps on her arms.

As if there was an unexpected chilliness in the scorching summertime of the sixth month.

Remaining calm and collected, she brushed away the thoughts in her mind.

Sun momo was dumb for a moment.

It was Yu Xiang who broke the silence.

With a smile, Yu Xiang spoke: “Since this was the case, it’s a wonderful thing that Jiang second miss can return to the capital.

Dare to ask momo, when do you plan to depart with second miss”

Sun momo finally paid attention to Yu Xiang and asked after her: “This is…….”

So, Madam let this servant stay and take care of Jiang second miss.”

The personal servant girl of Madam Liu from the Minister Chengde residence was unexpectedly left here to serve Jiang Li.

When did Jiang Li become so close to the Madam of Minister Chengde Sun momo had doubts, however, her mouth replied: “Of course Madam wishes that second miss could return as soon as possible.

We will wait for second miss to pack up her things and then we can immediately set off.”

“So it’s like that,” Jiang Li raised the corner of her mouth, “Just nice, we can set off now then.”

When these words came out, the surrounding people were stunned, including those servants beside the carriages.

Sun momo covered the scorn in her eyes and said: “Second miss doesn’t have to be so impatient.

Madam has already ordered for second miss to have to return to the residence, there is no need…….”

“I’m not impatient,” Jiang Li interrupted her words, “rather, there is nothing to pack.”

“I don’t have any luggage, just the luggage that was brought here at that time.

It has been six years, momo should not think that there are still anything that remains, right It’s not as if momo doesn’t know, I wasn’t permitted to bring whatever gold and silver or jewelry, only bringing a few pieces of clothing.

I haven’t been able to wear those clothes since long ago.

In the entire nunnery, the only thing that I have is just Tong’er.

As for those wooden stools, bowls, and chopsticks…….

Could it be the chief assistant residence still needs them If so, I will let Tong’er pack them up.”

In front of Yu Xiang, these words of Jiang Li, didn’t it imply that the chief assistant residence had mistreated this di daughter Foolishly staying in the mountain for six years, without any valuable things to use and without a penny.

Now that she was leaving, not a single luggage needed to be packed and brought.

Even her, a lowly person, still had a few pieces of jewelry.

If these matters were to be known, who knew what kinds of issue would be raised!

Sun momo saw Jiang Li earnestly looking at her as if she didn’t understand that the words just now contained a deep meaning of mocking.

This second miss who had left Jiang residence for six years really wasn’t what the letter said, impulsive and brainless.

Instead, she was gentle and courteous, yet wouldn’t be easily pleased by people.

Sun momo squeezed out a smile with difficulty and spoke: “All right then, second miss, allow these bodyguards to rest and drink tea for a while, then we can set off right away.”